Yes, I took another short blogging break, but what can I say? I’ve been outdoors enjoying the spring sunshine and warm weather, both very welcome after such a long, cold winter.

Stephen’s parents were in town last week, and we had a great time hosting them at our house for the first BBQ of the spring season. Using the new Webber grill that his family gave us for Christmas, Stephen cooked up a tasty batch of blue cheese burgers, which we served along with red wine and Greek salad. It was all so delicious, and we had such a fun time, that I didn’t even remember to snap any pictures of the meal. Though we’ve only done it a couple times so far, hosting dinners at our new house is quickly becoming one of my favorite activities. 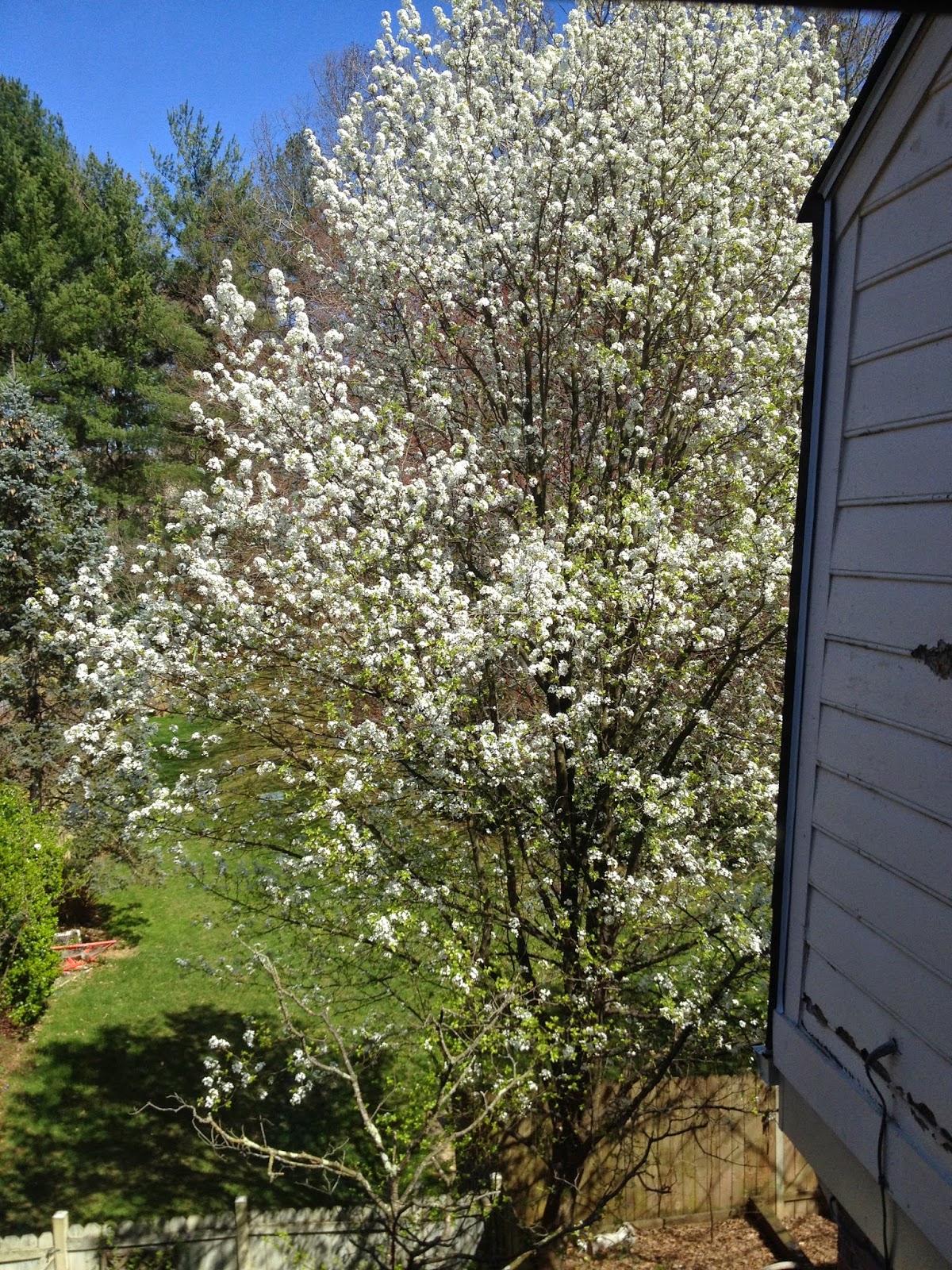 While his dad was working, Stephen, his mom and I also braved a rainy day to head to the Udvar-Hazy Air & Space Museum and one of our favorite wineries, Fabbioli Cellars. As always, we had a great time there, and came home with a nice red to enjoy the next time we grill. 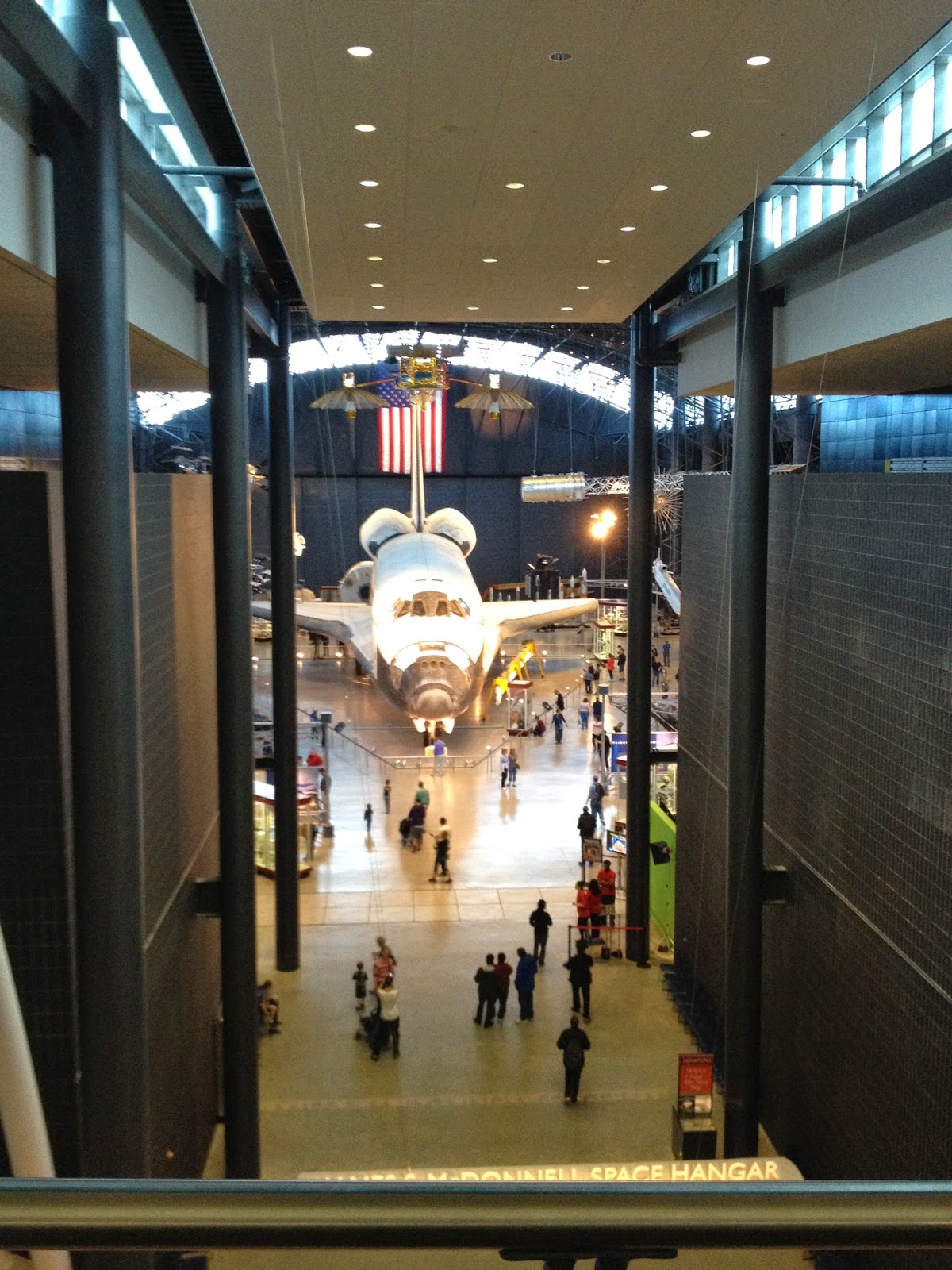 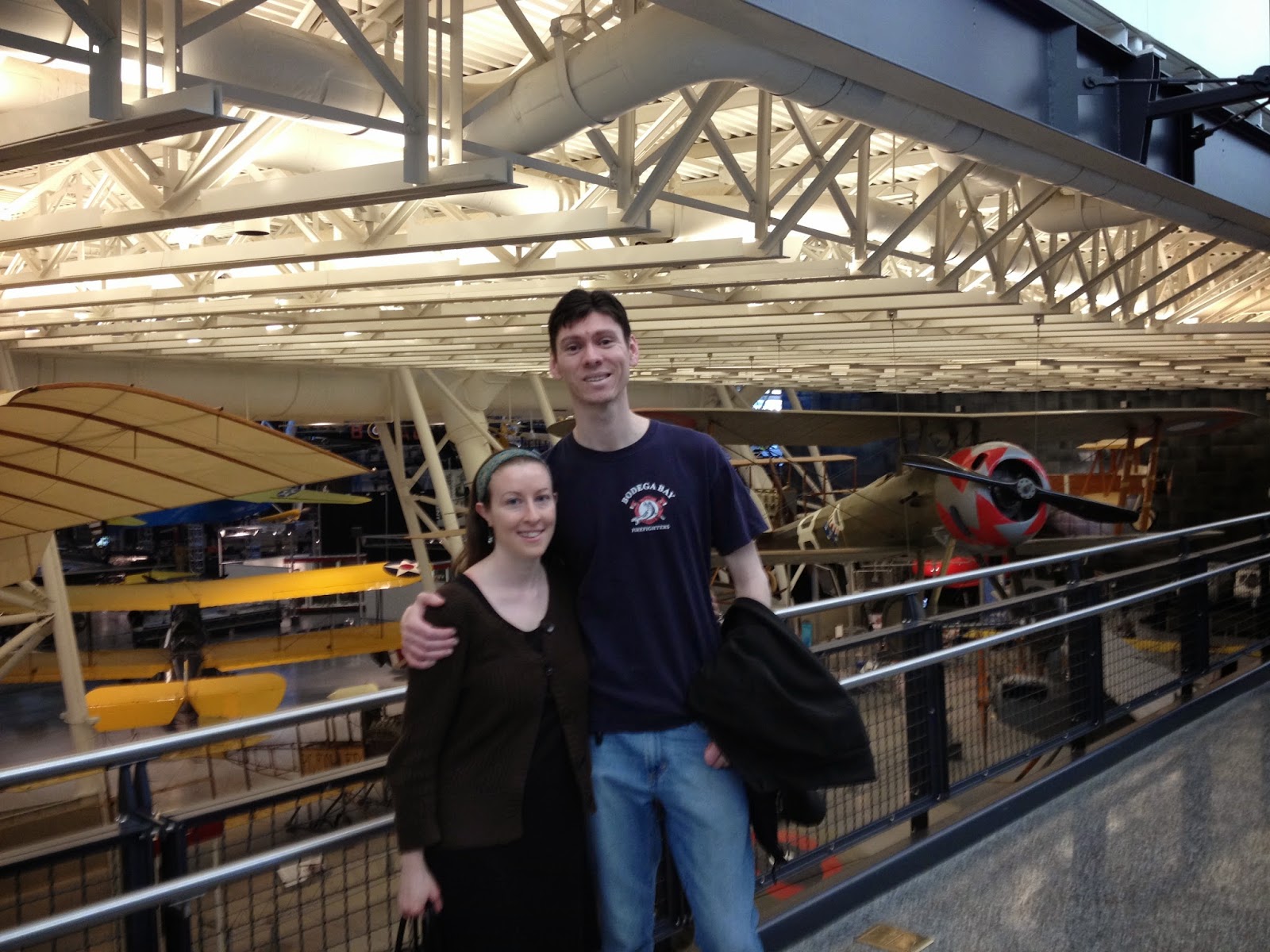 How have you been welcoming spring? Do you love spending time outdoors when the weather warms up?
Posted by Heather at 9:00 AM 10 comments:

As a musical theater and opera fan, it had long been one of my dreams to visit the Metropolitan Opera and see a performance by Diana Damrau, who I once had the pleasure of hearing in recital at DC’s Kennedy Center.

That dream finally came true a couple weeks ago when Stephen and I visited the Met for a Saturday night performance of Manon, staring the amazing Damrau as the title character. From the story and music to the performances and costumes, everything about this show was spectacular, and it now stands out as one of the two best operas I’ve ever seen. (The other was the Kennedy Center's The Elixir of Love, staring the sadly now-divorcing husband-and-wife duo Ailyn Perez and Stephen Costello.)

Damrau’s charming and charismatic Manon was everything I expected her to be, and even our seats, way up in the highest tier, offered a decent view and great acoustics. Though the show lasted four hours (including two intermissions), I was so caught up in the love story and phenomenal singing that I hardly even noticed the time. 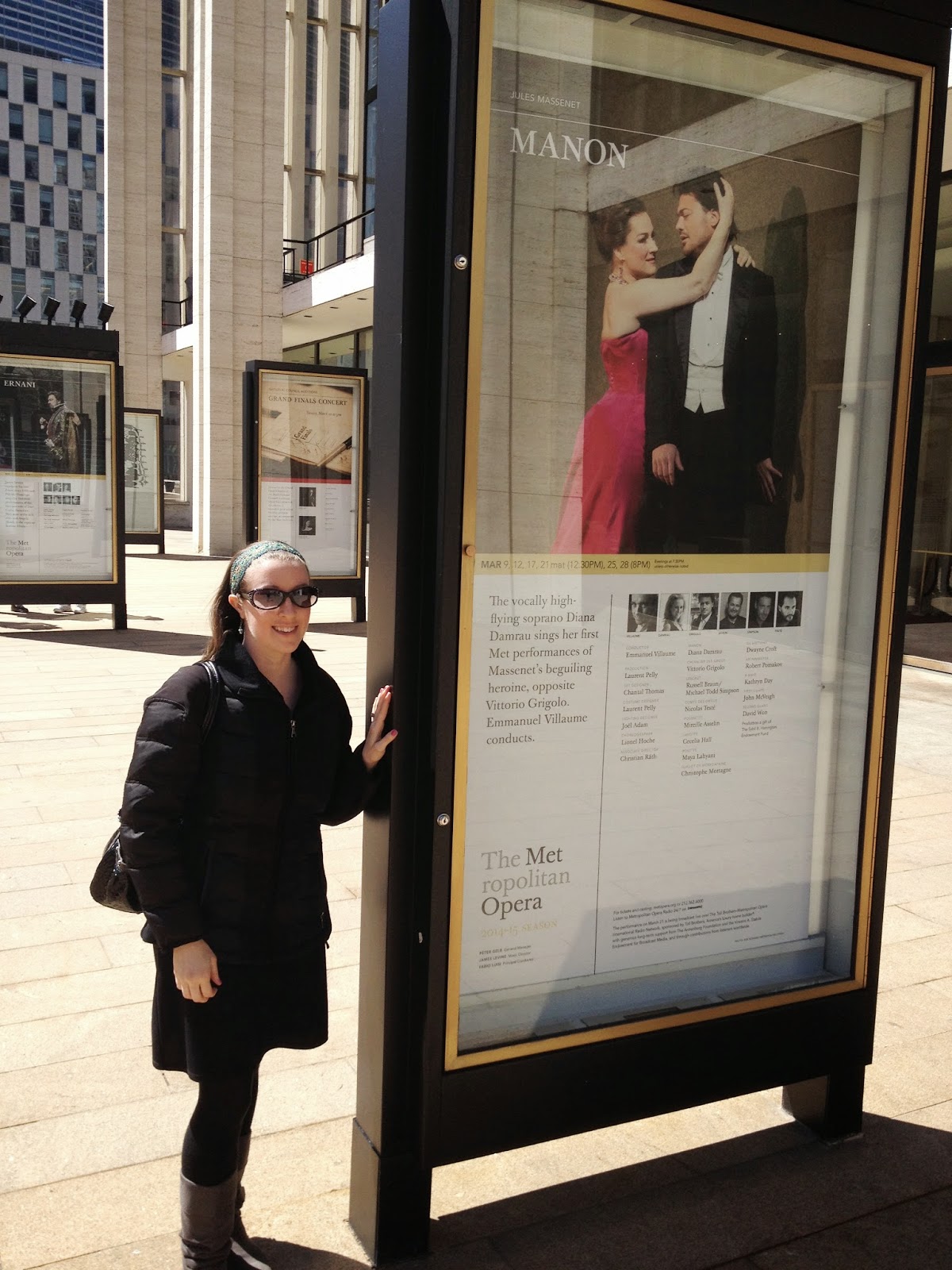 After the performance ended around midnight, we walked back to the hotel in late-March snow flurries and rested up for our backstage tour the following morning. Just like the show, this tour was an opera lover’s dream come true, as we got to visit the costume and carpentry shops, singers’ dressing rooms, group rehearsal spaces and more. And while we couldn't actually walk onstage, we did get to see the crew using a huge elevator and tons of equipment to erect sets for Don Carlo, the Met’s next performance.

If you're ever in New York and would like to take this tour, visit the Metropolitan Opera Guild's website to reserve tickets. You won't be disappointed! 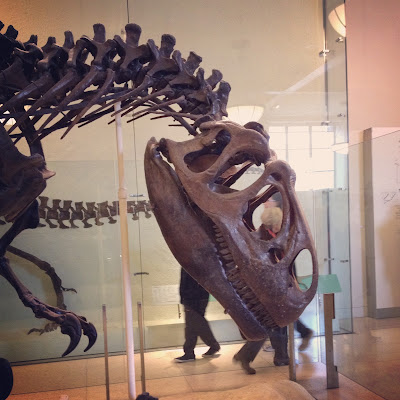 Finally, no visit to NYC would have been complete without a quick trip to the Museum of Natural History. I may be a grownup, but I still love me some dino bones. :)

Thanks for a great time, New York! I will definitely be back soon.
Posted by Heather at 9:00 AM 10 comments:

Our New York City vacation continued Friday morning, when, after a quick breakfast, we headed downtown for two scheduled tours – one at the 9/11 Tribute Center and the other at the Lower East Side Tenement Museum. The day got off to a slightly confusing start, though, when we accidentally got on a Brooklyn-bound express train and missed our original tour time at the Tribute Center. Fortunately, the staff members were understanding and transferred us to the next time slot.

For those not familiar with the Tribute Center, it was created by the September 11th Families’ Association and features “the stories of 9/11, told by those who were there.” Our two tour guides, for example, were both longtime residents of the surrounding neighborhood. While showing us the outdoor memorial, they each shared facts and personal accounts, including stories about meeting World Trade Center survivors and seeing New Yorkers come together in the hours and days immediately following the attacks. 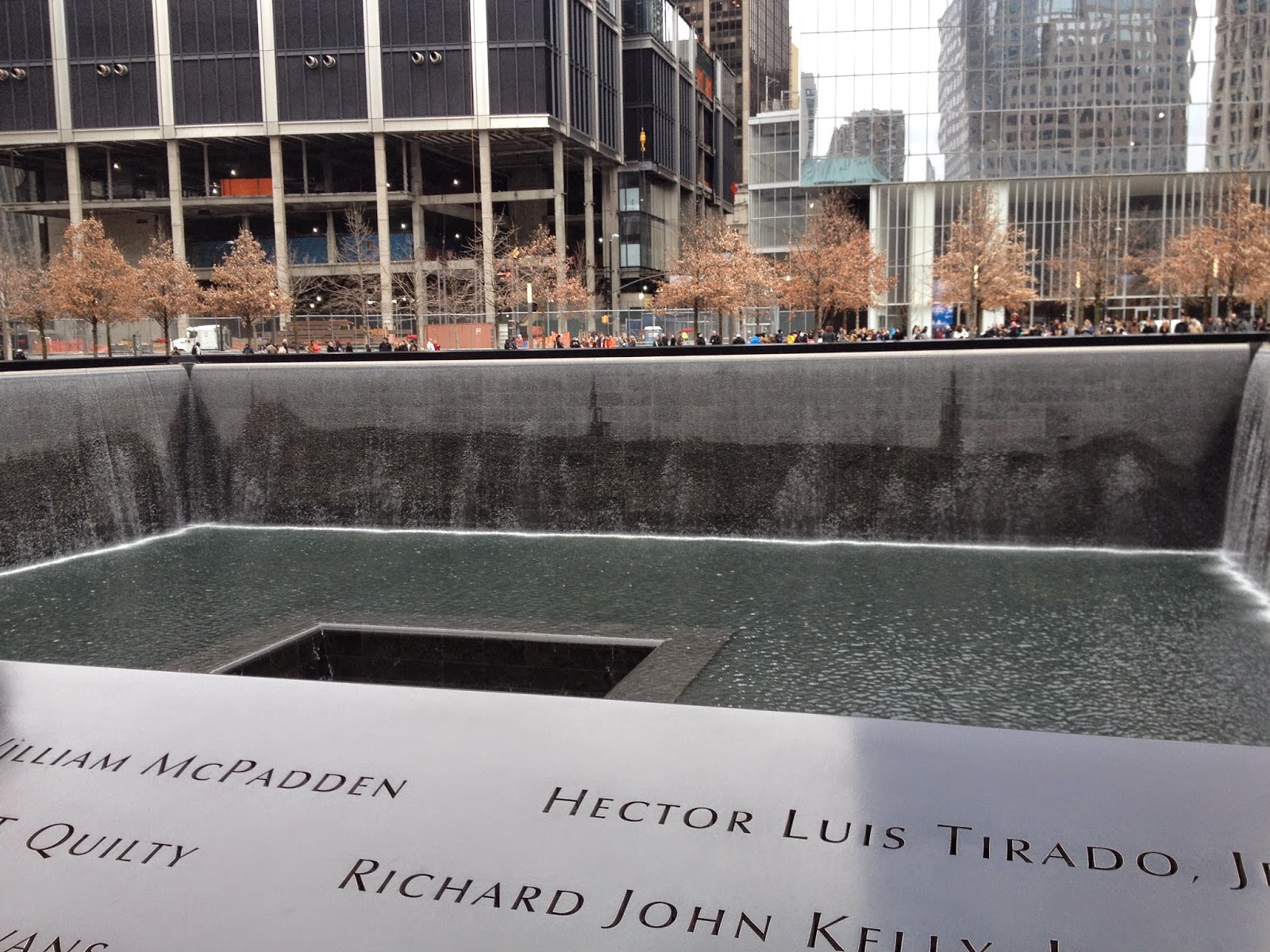 Inspired by memories of hope, horror, love, loss, tragedy and human compassion, our guides' stories were incredibly moving, and I'd strongly recommend this tour to anyone who wants to connect with neighborhood residents or survivors in a very personal way. In addition to these firsthand accounts, the Tribute Center also offers a gallery of photos and artifacts visitors can look through either before or after their tours, thus adding to the powerful, emotional nature of the experience. 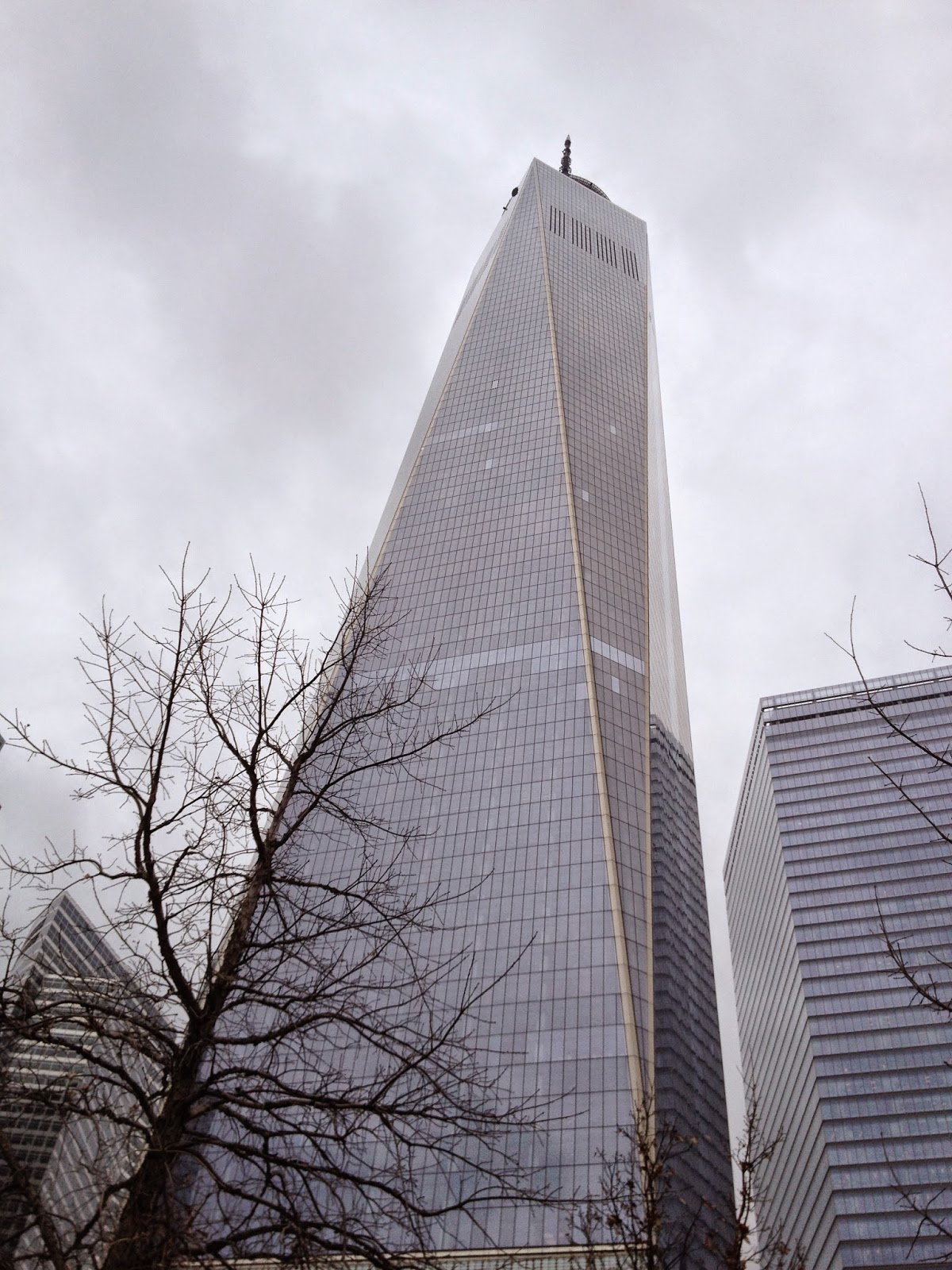 After taking some time to visit the Tribute Center gift shop, get lunch and process what we'd heard, Stephen and I next headed to the Lower East Side Tenement Museum to learn about the real immigrant families who once lived in the building. Our tour, called “Hard Times,” allowed us to view two restored apartments and hear the stories of German-Jewish and Italian-Catholic families who struggled to make new lives in America between 1863 and 1935. We enjoyed this tour, as well, and would love to come back in the future to view other apartments, learn about the lives of sweatshop workers and experience some of the Lower East Side's unique culinary treats.

Have you been to either of these places? What are some of your favorite museums or sites to visit in New York City?
Posted by Heather at 9:00 AM 8 comments:

Email ThisBlogThis!Share to TwitterShare to FacebookShare to Pinterest
Labels: travel

Oh, hi! I know it’s been over a month since I last blogged, but honestly, I haven’t had too many exciting things going on to write about lately. Instead of creating new posts, I've been spending my time reading, revising my novel, hitting up trampoline boot camp and continuing my gig as a freelance contributor at Brit + Co.

One fun thing I did do during March was visit New York City for a mini vacation that included seeing my favorite singer perform at the Metropolitan Opera. Here, in a series of three posts, I’ll be sharing some pictures and an overview of what we did each day, beginning last Thursday with our initial road trip and the chance to see a taping of The Nightly Show With Larry Wilmore. 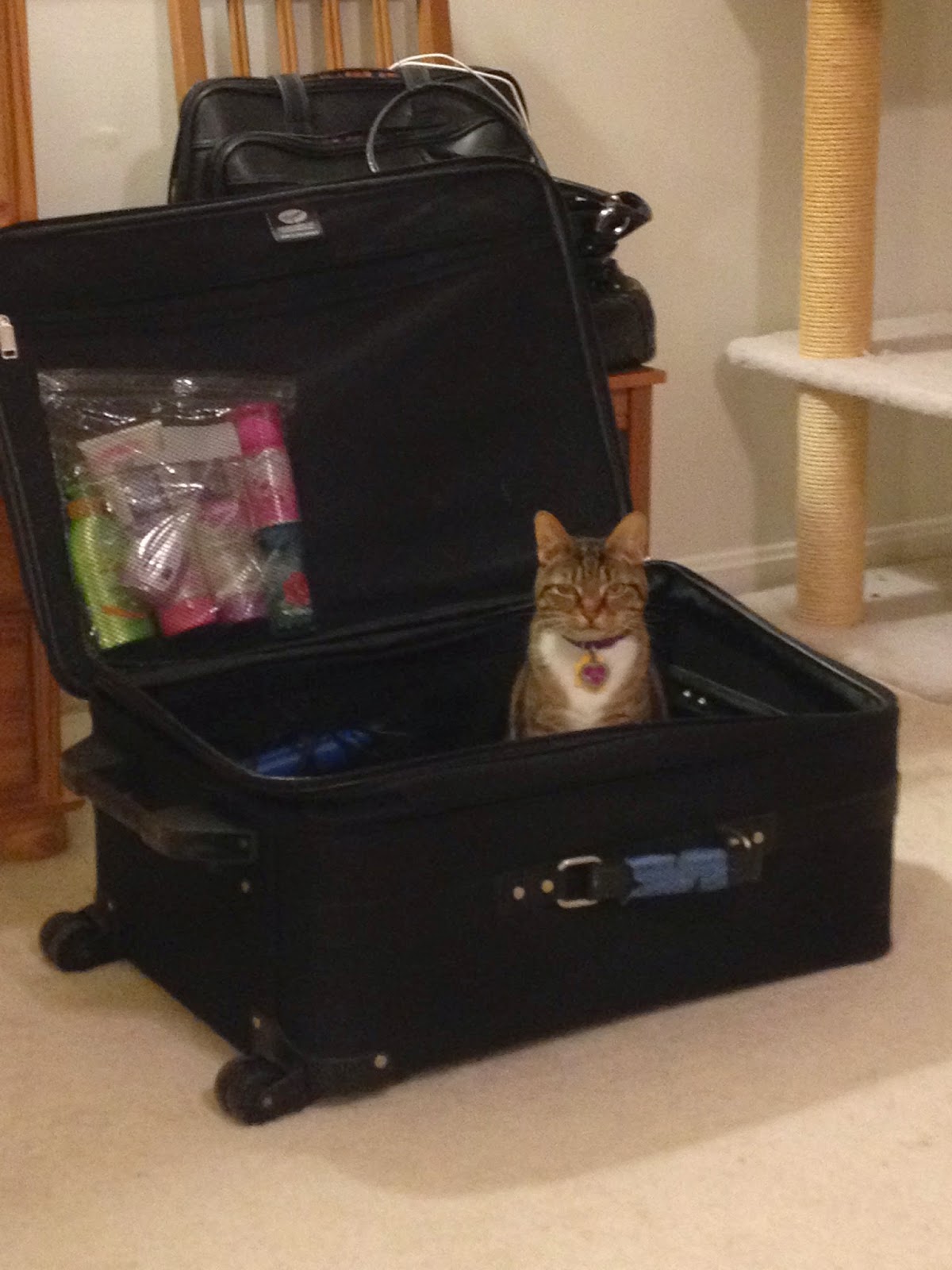 After a pretty straightforward 4.5 hour drive, which included a brief lunch stop at a Delaware rest area, Stephen and I arrived at the Holiday Inn Midtown near Columbus Circle on the West Side. We chose this hotel because it was affordable and also within walking distance of Lincoln Center, where the opera house is located.

While not especially luxurious, our room was clean, comfortable and bigger than I expected. The lobby was nice, the staff members friendly, and the price no more than $180 a night. I would definitely stay there again in the future. 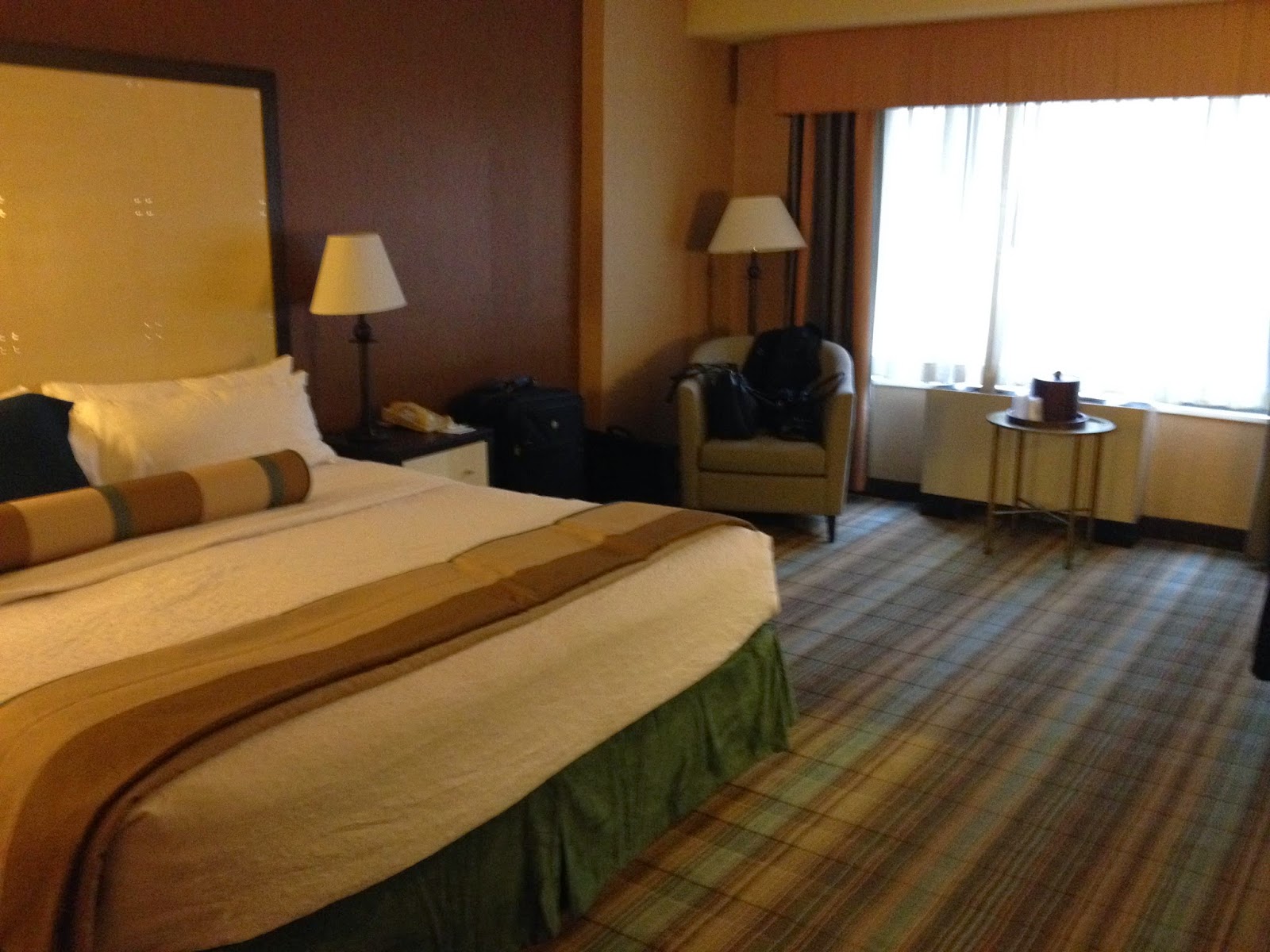 We dropped off our car and bags, then walked a few blocks to the The Nightly Show studio. Since we had tickets and were also the third and fourth people in line, we got great seats once we entered. (If you ever want to attend a taping, just be sure to reserve free tickets online ahead of time and get there early, since not everyone who has a ticket is guaranteed a seat.) 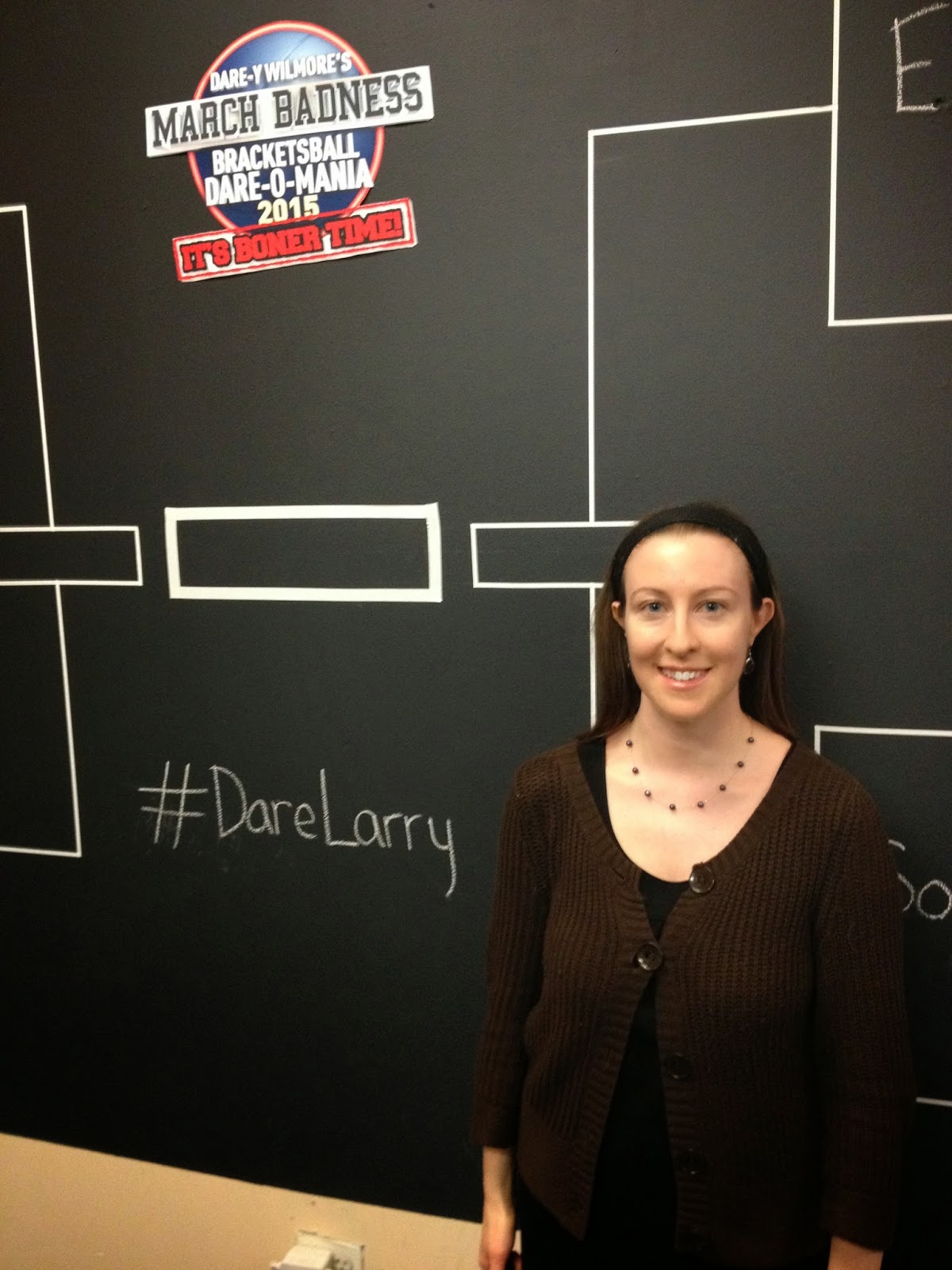 We were allowed to take pictures of the set before the taping started, and also got to do an audience Q&A with Larry, who was just as cool off-camera. The taping itself was of course awesome, too, especially since we got to see all the behind-the-scenes action, including makeup touch-ups and the post-show photo session with the guest panel. 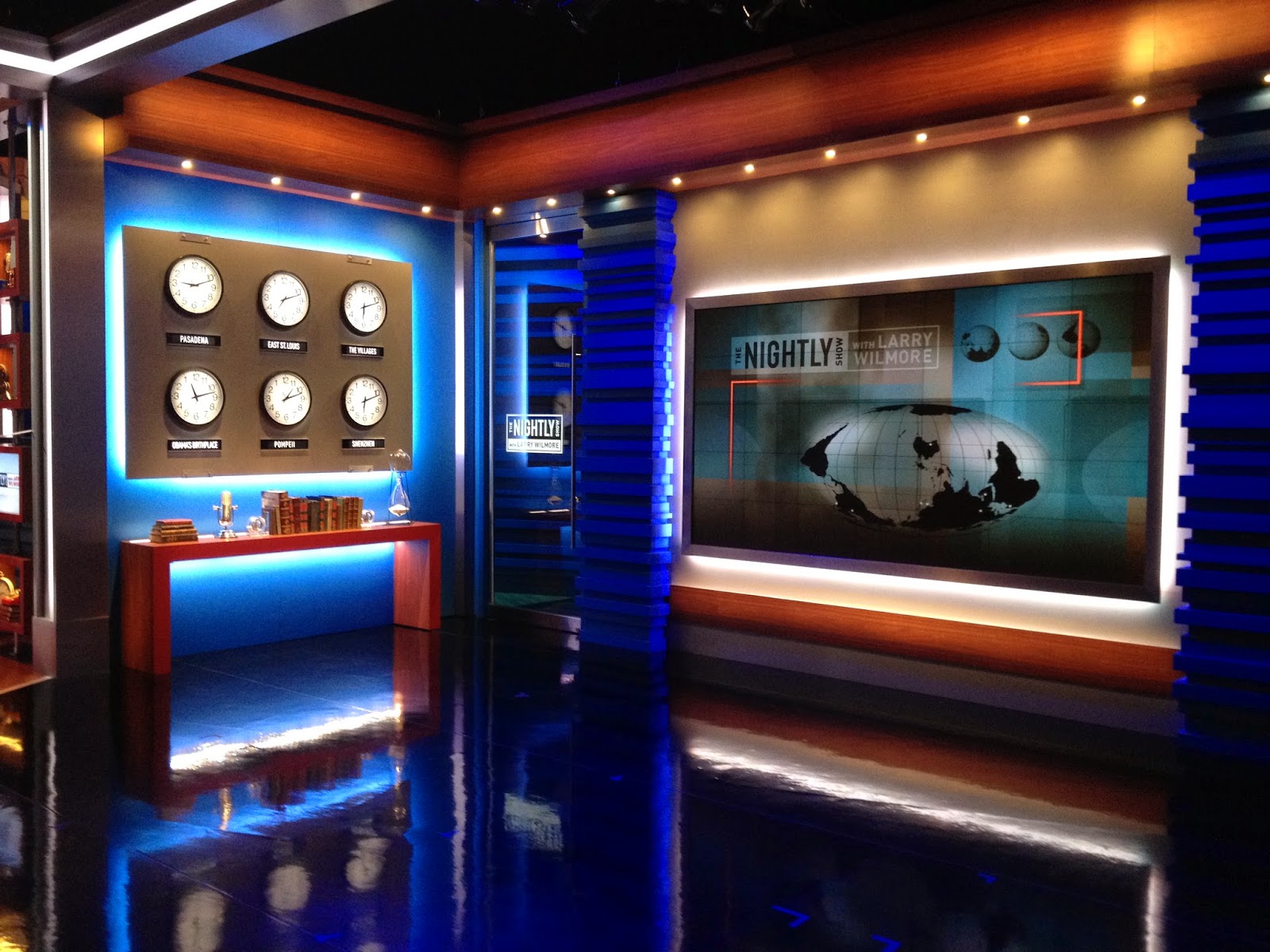 After it was over, we stopped off for Thai food at an unassuming little place that ended up being decently good. Then, tired from the drive, we decided to call it an early night and rest up for our Friday tours at the 9/11 Tribute Center and Lower East Side Tenement Museum.

Have you ever been to a TV taping? Despite being from So Cal, this was only my second one, the first being a Full House taping my friend and I went to see with our moms way back in middle school. Oh, the memories. :)
Posted by Heather at 9:00 AM 10 comments: