If you’ve been reading this blog for a while, you already know that I’m no fan of the Fifty Shades series. I won't go into great detail repeating the exact reasons why, except to briefly say that the series has what I consider to be a sickeningly creepy ending, and also because in my eyes, the books exemplify female abuse and naivety rather than actual sexual empowerment.

So, although I've sworn off reading most of the ongoing news coverage devoted to that provocative collection, I do want to share the latest gem I came across last week – the announcement that a so-called adult fiction publisher will now be infusing classics like Jane Eyre, Pride and Prejudice and Sherlock Holmes with “explosive sex scenes.”

Um, say what?! Seriously, thanks to the likes of 50 Shades, are the multitudes of hot historical and contemporary romances currently on the market now considered to be too bland, leaving readers hungering for nothing less than Wuthering Heights bondage scenes and sexual encounters between Sherlock and Watson (yes, really, that's the plan)?

While I'm definitely not one to turn up my nose at a juicy romance, I also believe that classic stories like those mentioned above are already amazing in their own right, in part because of the non-sexual ways in which they capture human emotion. Yes, they were written during times when “explosive sex” wasn’t as commonly infused into literature, meaning that if they were being written today, the authors may have chosen to, in some cases, be more explicit. Even so, does that aspect alone give modern writers a compelling reason to go back and "enhance" them for an audience that is potentially too focused on the sexual aspects to appreciate them for the eloquent and entertaining works they already are?

In any event, thank goodness for cuddly kitty therapy to help restore my sanity at times like these!

Email ThisBlogThis!Share to TwitterShare to FacebookShare to Pinterest
Labels: books

Although I haven’t yet started working with a critique partner (not there yet), this hilarious graphic I found posted to Facebook by Ladies Who Critique absolutely made my day!

Why, you ask? Quite simply because, critique partners aside, this is the exact type of dialogue I subject myself to on a regular basis as I move along through the first draft of my novel. This witty cartoon definitely reinforces my decision to silence the nagging voices and just keep on going!

Happy Friday, and have a fabulous summer weekend!
Posted by Heather at 9:00 AM 14 comments:

Got five minutes? If so, Tim Kreider’s New York Times piece The ‘Busy’ Trap, one of the most thought-provoking items I’ve read in a while, is worth taking a moment to check out.

This poignant op-ed speaks to an issue I’ve thought about quite a lot recently – the fact that in our culture, being busy beyond belief has become, as I once heard described in a similar piece, a badge of honor. More and more often, it seems that if someone is not "crazy busy" all the time, especially here in the land of over-achievement (aka DC), we too quickly write them off as a personal and professional failure. Worst of all is the fact that we self-inflict so much of the "craziness," fearing that if we're not constantly pushing ourselves to the breaking point, we somehow haven’t accomplished enough.

I've always considered myself to be an ambitious and driven person, overwhelmed by dreams that may at times exceed my grasp. But last year, I learned the hard way that I don’t have to consistently take on everything in sight, all at once, to be “successful.” To my personal relief, I discovered the joy that comes in prioritizing, balancing, and focusing on only those matters that are most important at any given time.

No longer do I willingly overschedule myself with a long list of things I "should" be doing. No longer do I feel guilty when people look at me like an alien for choosing not to rush back into working full-time at the moment, a choice I'm fortunate to be able to make financially. Instead, I'm unashamed to be using these post-graduation summer months to travel, including to see my Nana and family out in California, and also to make sure I'm giving myself enough time to thoroughly consider the various career paths, each rewarding in its own way, before me. No longer am I afraid to say no or embarrassed to admit that I take the time to relax, read, hang out, and enjoy some of my favorite things in life, even those that aren't considered to be especially "productive."

How about you? Have you ever battled “crazy busy” syndrome, and what do you think this trend says about our society as a whole?
Posted by Heather at 9:00 AM 14 comments:

After enduring more than a week of temperatures that hovered right around the 100-degree mark or higher (we’re finally down into the 80s – hooray!), I’ve been daydreaming more than ever about my future dream home and the glorious pool I plan to construct in the backyard.

Unlike the community pool here in our apartment complex, which is small, shallow, always crowded and constantly scrutinized by the watchful eyes of a lifeguard, my someday pool -- like those seen below -- will be a private refuge of escape and relaxation, as well as the perfect setting for the occasional pool party or summer BBQ bash.

Visit my Home board on Pinterest to check out these and other fun inspirations. What's your dream home must-have?
Posted by Heather at 9:00 AM 23 comments:

First there was Pinterest, then Instagram, and now, in the latest online obsession to catch my eye, Goodreads. While I may be a bit late to the game, ever since setting up a profile last week, I’ve been satisfying my inner geek by rating books I've read over the years, tracking those I’m either currently reading or can’t wait to check out, and connecting with friends to compare their own literary loves and hates.

Are you on Goodreads and interested in linking up? Leave your username or send me a friend request!

What’s your latest online obsession?
Posted by Heather at 9:00 AM 17 comments:

Happy 4th of July! With hordes of tourists descending upon DC, plus temperatures still hovering around the 100-degree mark, Stephen and I are as grateful as ever that we can watch the national fireworks show, along with others in the area, right from our apartment building. While I definitely love this holiday and have braved the in-city festivities plenty of times, this year, I'd rather do without the crowds and especially the hot, stuffy portable toilets -- yuck!

What I won't do without? Tasty eats and treats like the ones below. Visit my Food & Drink inspiration board on Pinterest for links to these recipes, plus tons more. (For what it's worth, I tried embedding individual links into this post, but alas, Blogger appeared to be suffering from a major case of the unfriendlies.)

How are you celebrating today?
Posted by Heather at 9:00 AM 11 comments:

After spending two full weeks in California visiting my Nana, family and friends, it was harder than ever coming back to DC last Wednesday, even without the added delight of 100+-degree temperatures and the unexpected mother-of-all-thunderstorms that swept across the area Friday night, bringing 80-mph winds and causing damage throughout the region.

Despite a few scary moments when I was sure the windows were about to give way, our high-rise building thankfully made it through the storm unscathed. Plus, while thousands are still without power around town, ours amazingly came back on within a couple minutes of the storm’s passing.

Here, a look back at a few highlights, both the good and the not so good, from the past couple weeks. 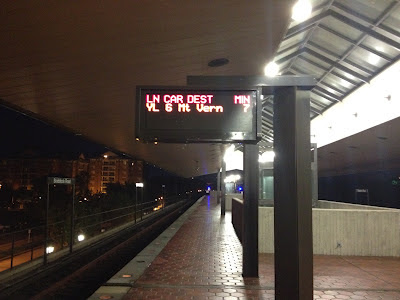 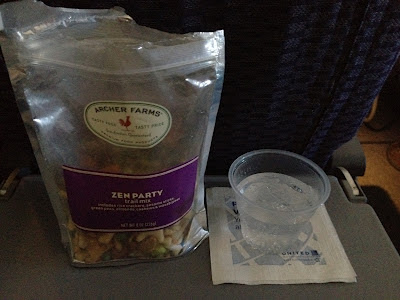 Not So Good {June 13}: Shaking myself awake at 4 a.m. to make a 6 a.m. flight out of the DC airport -- luckily only a few minutes away by Metro -- only to find the line at security longer than ever before once we arrived. For the first time, Stephen and I found ourselves dashing to the gate just as our flight's "final call" was announced, an experience that then unbelievably repeated itself in Houston, where we were late getting in and forced to run between terminals in order to make our connection. Needless to say, this was not my favorite bicoastal travel experience! 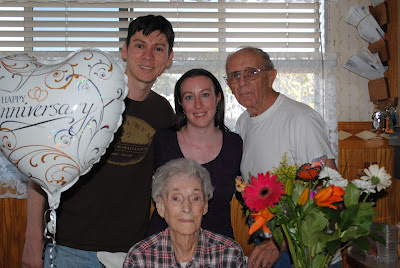 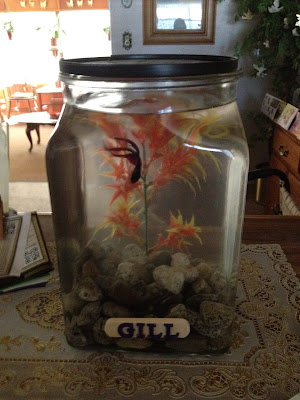 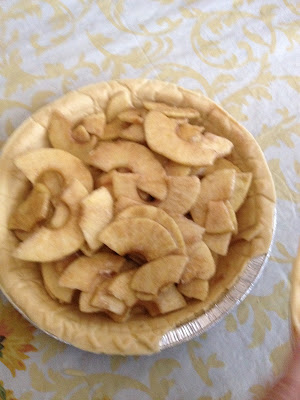 Good {June 14}: Celebrating my grandparents' 60th wedding anniversary, a memory I will always keep close. As part of the low-key festivities, our family gifted them a colorful betta fish named Gill, while my sister and Stephen baked up a delicious apple pie for dessert. 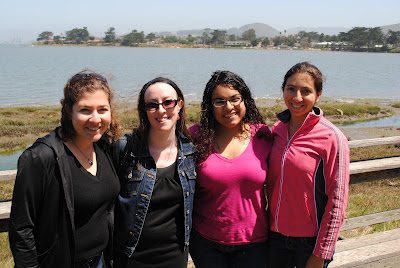 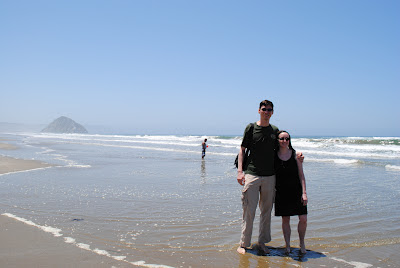 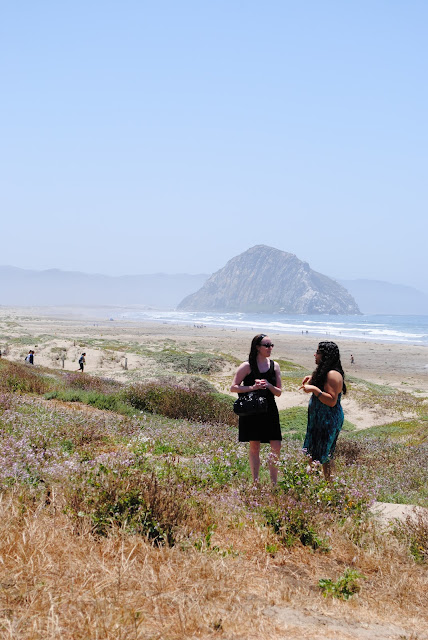 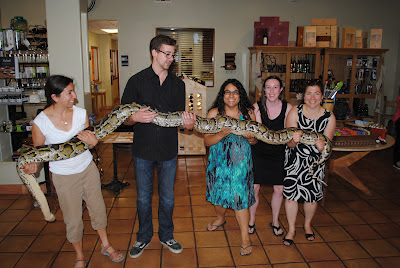 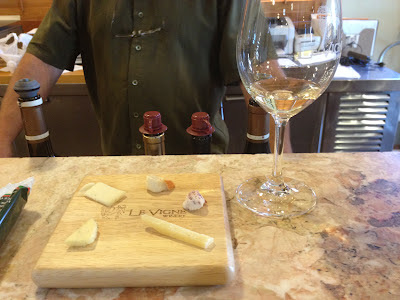 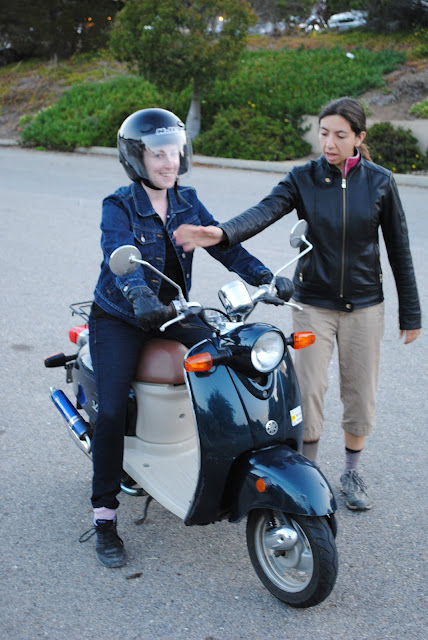 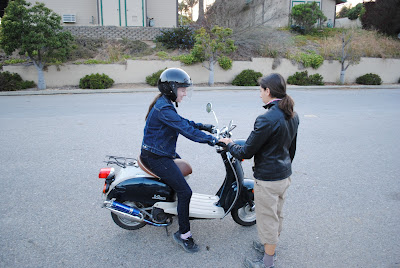 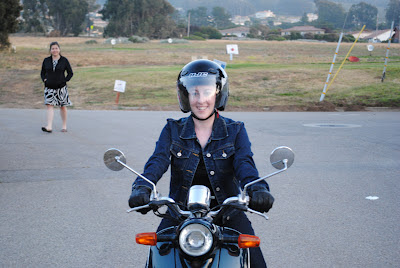 Good {June 16-17}: Heading up to California's Central Coast for a weekend of wine tasting, beach hopping and Vespa riding lessons in Moro Bay and Paso Robles with Stephen and my best friends of more than 15 years. One of the wineries we visited was randomly hosting a "zoo day," where visitors could take turns holding a 120-lb. python -- admittedly not my favorite type of animal, but worth being a good sport around, at least for the couple seconds it took to snap the picture!

Not So Good {June 29}: Hiding out in the closest with my equally scared husband and two very terrified kitties during the worst storm ever to hit the DC area outside of a hurricane. Oh California, how I miss you already (although I must admit that earthquakes do scare me even more)!

Has your area been affected by the sweltering temperatures, intense storms or massive wildfires that are impacting regions across the country? The amount of destruction and number of lives lost on account of these disasters is nothing short of heartbreaking, to say the least.
Posted by Heather at 9:00 AM 13 comments:

Heather
I'm a California girl at heart who's learning to live and love life in our nation's capital. Inspired by food, fashion, fitness, travel, career and adventure, I'm on a mission to live a positive, meaningful life to the fullest, whether East Coast or West Coast, in high heels or flip-flops.